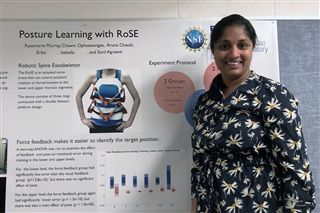 Last summer, Upper School Science Teacher Aruna Chavali was invited to participate in a robust professional development experience at Columbia University’s Robotics and Rehabilitation (RoAR) Lab. The RoAR Lab develops innovative robots and methods to help people with neurological injuries or diseases relearn, restore, or improve functional movements. Funded by a grant from the National Science Foundation, they chose Ms. Chavali and two Marymount seniors, Erika C. ’19 and Isabella L .’19, to work on an independent research project at the lab for six weeks. “This was a fantastic opportunity for me as an educator,” Ms. Chavali reports. “The teacher became the student: I didn’t have all the answers, and we relied on each other to troubleshoot problems and to make sense of the information we were gathering.”
The team designed an experiment using the Robotic Spine Exoskeleton (RoSE) to assess whether visual or force feedback was more effective in adjusting posture in people with spine disorders like scoliosis. In visual feedback, test subjects could see their torso moving and recognize when they were out of alignment, prompting them to adjust their stance; in force feedback, the brace automatically “forced” subjects into the correct position. They ultimately concluded that the visual method of training was superior. “This was truly our experiment,” Erika explains. “From designing the experiment and choosing the metrics to creating a graphical user interface for better accessibility, we played a critical role in the development and success of the project.”
Throughout the experience, Ms. Chavali, Erika, and Isabella were guided by Ph.D. students who acted as mentors and offered helpful feedback on their research. At the end of the six weeks, the team presented their findings to RoAR researchers who later shared their work at the 2018 Rehabilitation Research Day at Weill Cornell Medical Center. “Working with everyone in the lab was truly incredible,” says Isabella. “I also interned in a mosquito lab at Rockefeller University this summer which I am continuing throughout senior year. I hope to study molecular and cellular biology in college and become a scientific researcher one day.”
Back